skip to main | skip to sidebar

Back in June- when I was not hopping along on crutches and my foot elevated, I came across a really yummy recipe. The recipe is from Pioneer Woman Cooks. But, I've made a few adjustments and learned a few lessons making them. Tonight (yes I'm finally upright long enough to cook!) I made them at my parents for Sunday dinner.

First step- Clean lots of little potatoes. You would be surprised at how many little potatoes people will eat. Tonight I made about 48 of them and there were 6 adults and 4 kids- and they are ALL GONE! Each of the kids only ate 1.

Second step- Boil them until they are soft. You want to stick a fork in them easily. 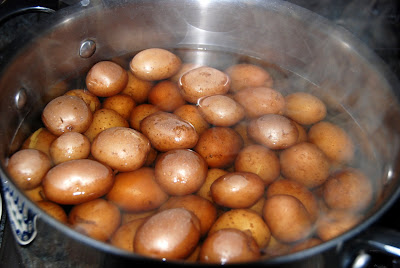 Third step- Place them on a well greased cookie sheet. I used a lot of PAM. 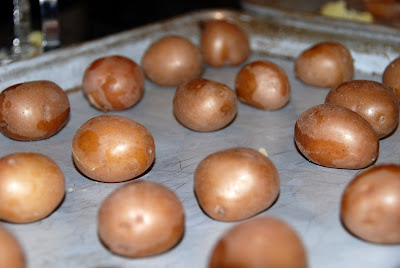 Fourth step- Mash them down with a potato masher. You want them to stay about 1/3 of an inch thick. 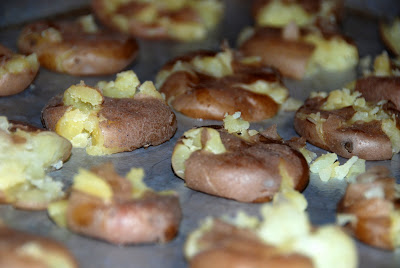 Fifth step- Generously sprinkle olive oil on you smashed potatoes. (PW uses a brush- but not me- I prefer to pour). 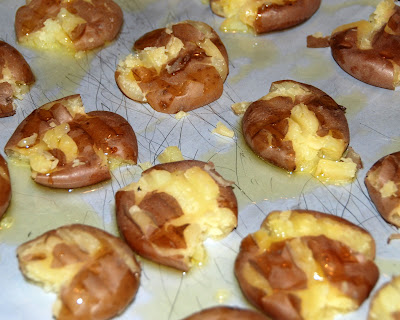 Sixth step- Sprinkle with a lot of kosher salt. I've tried it with both kosher and regular. The kosher tastes better and gives a better texture. 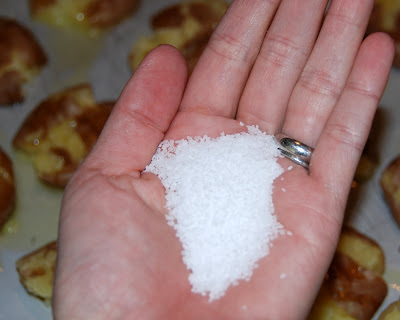 Seventh step- Chop and season with your fresh herbs. I like rosemary and thyme. I was tempted to add parsley but then I would have wanted to add sage as well, and I just wasn't sure I wanted that much flavor. So, I stuck to rosemary and thyme. I used three good sized sprigs of each. Keep in mind though, I was making 48 of these little smashers. 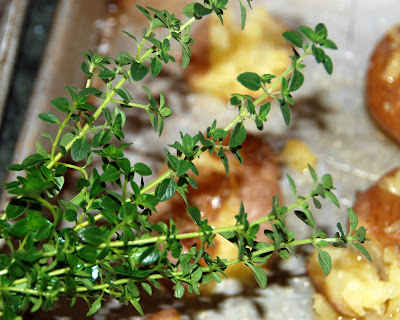 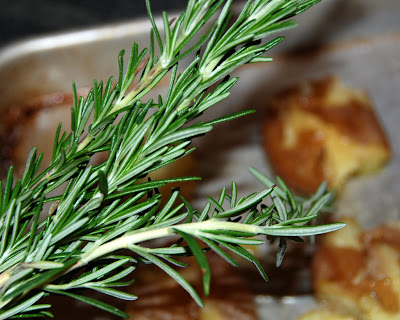 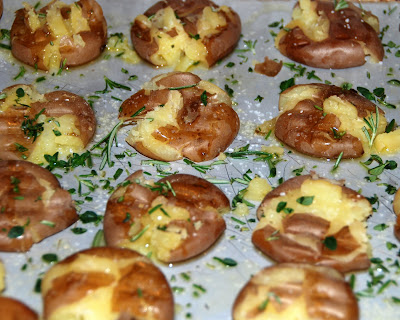 Eighth step- Cook 'em. If you are convecting, put your oven at 425- otherwise 450. You will want to cook them for about 20 minutes. They should be a crispy and browned. 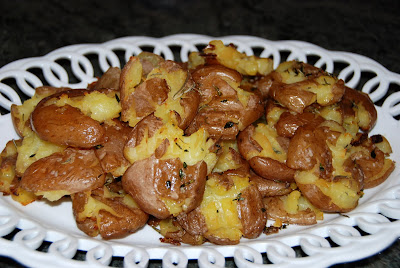 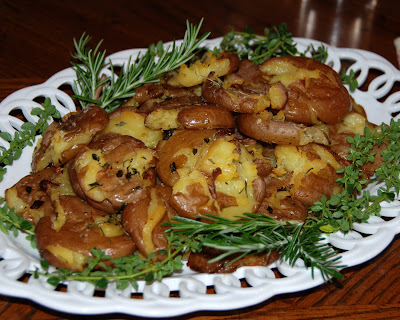 Tenth step- Garnish them with more sprigs of rosemary and thyme.
Here are a few things that I learned from making them several times.
1. Find as small of red potatoes as possible. I mean small. Not medium, not kind of small, really really small. Lets say the size of a ping pong ball or smaller. Golf ball size is too big.
2. Use lots of kosher salt. The flavor is stronger and it adds to the texture.
3. Oh, and really boil them until they are soft.
Everyone loves these. They are really easy to make. I won't say they are quick, because they aren't. Boiling them and really getting them soft is going to take a while. But not as long if you use little tiny potatoes. Plus the 20 minutes in the oven.
They also make really good left overs or munchies later on in the evening. That is assuming there are any left.
Prepared by Unknown on Sunday, August 24, 2008

Hi- I'm Amy and I love to cook. Unfortunately, as a working mother, I don't get nearly enough time. I've decided to share the recipes that I do have time to make with you. I hope you enjoy this recipe blog and find the recipes delicious and easy to make.